For Daron Watts (JD 1994), mentorship is a deep-rooted passion 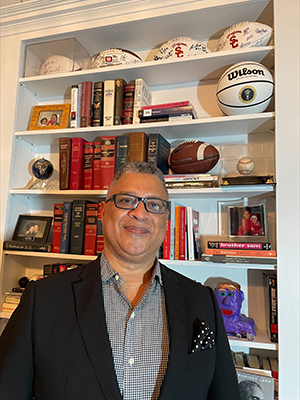 On the bookshelf in Daron Watts’ (JD 1994) home office in Washington, D.C. are four signed USC footballs. The former Sidley Austin LLP partner and founder of The Watts Group — a boutique firm at the intersection of law, policy and politics — is a huge Trojan football fan and longtime Cardinal and Gold supporter.
After graduation, he bought season tickets, often commuting to games from Washington, D.C., where he relocated in 2010 to found and co-lead Sidley Austin’s Government Strategies practice.
Watts is just as big a fan of USC Gould.
“USC was always amongst my top choices for law school, and then once I discovered the special nature of the Trojan family and how things are done at USC law school — it’s very top-level intellectual performance but in an atmosphere that’s quite collegial — that put USC tops on my list,” says Watts. “It’s still part of the reason that I love the place. I’m sure that’s a big part of why I continue to give back in these small ways, helping anybody I can in the Trojan family.”
As a 2L Watts was inspired by the alumni who came to campus for fireside chats on how to succeed in law school, interviews and callbacks. Soon after he joined Sidley Austin, he returned to do the same thing and recruit for the firm.
“Mentoring is the key to success,” says Watts, who serves on the law school’s Board of Councilors. “You can be as smart as you want, but you need help from others to make the most of your opportunities and develop a successful career.”
Trusted Advisor

Born in Chicago and raised in St. Louis, Mo., Watts was inspired to pursue law by his father’s business lawyer. “My father was in the inaugural class of African American McDonald’s franchise operators, back in 1971 I think it was, and he thought his lawyer walked on water. I wanted to be a trusted advisor like that.”
One of Watts’ mentors, an alumnus and partner at Skadden Arps LLP, guided him from law school until he started his own practice. “Understanding how these relationships work, I did a lot of mentoring for USC students and alumni who joined my firm. And I always say, ‘Please pay that forward.’”
In D.C., Watts attends admitted-student receptions and responds when Career Services calls about students interested in relocating. Pre-COVID, he would return to campus for receptions for admitted students from diverse backgrounds.
“Our profession is one that still needs to improve in terms of diversity,” says Watts. “So, as an African American man myself, I’ve always made it an interest to help be a catalyst for that type of change.
“[Law firms] are trying to recruit and retain and promote diversity; God bless them for that. But I always say, make a promise that you’re going to mentor these students and help them succeed. That’s a far greater gift than $15,000.”