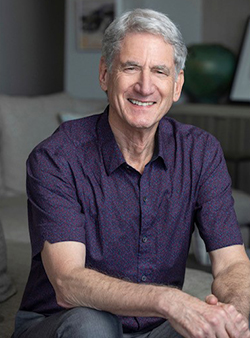 When Professor Emeritus Rob Saltzman was asked last year to join the Community Advisory Board, tasked with rethinking public safety processes at the university, he agreed right away. As a retired long-time Associate Dean and Dean of Students at the law school, he cares deeply about USC. “USC was my professional home until I retired in 2015,” he says. And as a former two-term Los Angeles police commissioner, he felt qualified.
His willingness to serve was also in character. Service is what Saltzman does.
Saltzman’s most high-profile civic engagement was his almost 10-year run on the Los Angeles Police Commission. In this role, he made headlines when he voted against the re-appointment of then-LAPD Chief Charlie Beck whom he faulted with not being transparent in his interactions with the commission. “If you think that something is not right, you should try to make it right,” Saltzman says. “Otherwise, what’s the point of civilian oversight?”
Saltzman, who graduated from Dartmouth College and Harvard Law School, spent 28 years at USC Gould. He taught Legal Writing during the 1980-81 school year, left to work in L.A. County government and returned as the associate dean in 1988. At the law school, he found a mentor in then-Dean Scott Bice, who “stood up for what’s right and modeled integrity.” As associate dean, Saltzman helped to diversify the student body, and established the Academic Success Program to assist students in improving their performance in law school.
The list of institutions and causes that have benefited from Saltzman’s civic engagement is long. A gay man, Saltzman says that his interest in public service is rooted in effecting change for people who have been disadvantaged, mistreated or not treated equally. “It is about trying to make things better for the underdog,” he says.
Two of Saltzman’s current obligations tie back to his experience in public safety as a police commissioner. The Community Advisory Board for the USC Department of Public Safety (DPS) evaluates how DPS, or a possible alternative, should respond to non-violent incidents like mental health calls or locked doors. Saltzman said that his LAPD background “will prove helpful as we take apart the Department of Public Safety and put it back together in a different way.” He also serves on the Factual Analysis Citizen Consulting Team (FACCT), created by L.A. District Attorney George Gascon to re-examine uses-of deadly-force by police in L.A. County.
Last year, Saltzman was appointed to the newly implemented L.A. County Probation Oversight Commission, where he chairs a subcommittee charged with reforming the juvenile probation facilities.
Wende Julien (JD 2009), the commission’s executive director, says she and Saltzman meet at least weekly to share research and keep each other updated on issues related to probation oversight. Her appreciation for Saltzman’s contribution is evident: “Rob is thorough, well-prepared and empathetic,” she says. “He wants the absolute best for the youth and adults involved in this, and his focus is on moving toward a more just society.