Although Ayers was homeless, paranoid and suffering with schizophrenia, Lopez was drawn to him and wanted to know his story. Over the next several years, Lopez wrote a series of columns about Ayers and his love of music - as well as how an unlikely friendship formed between the two men.

Lopez’s journey with Ayers was the basis of his book, The Soloist: A Lost Dream, an Unlikely Friendship and the Redemptive Power of Music, and subsequent movie.

“He has given me far more than I can ever give him,” Lopez said recently at the USC Gould School of Law’s second annual Saks Institute for Mental Health Law, Policy, and Ethics Distinguished Speaker event.

At his talk, which drew more than 100 students, faculty and members of the public, Lopez described Ayers’ road from promising classical bass student at Julliard to homeless man on Skid Row. He also described how a deep bond developed with the gifted musician. 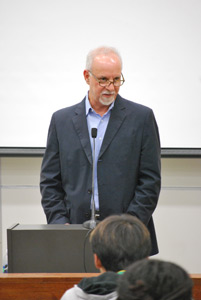 “When I walked across the street and introduced myself for the first time, Nathaniel was clearly terrified,” Lopez recalled. “He was afraid of me and everyone around him. He would ramble and his speech was disjointed. I realized there was a mental health issue, but I had no idea what it was.”

Still, Lopez would continue to see Ayers playing his two-string violin under the Beethoven statue - where he played for inspiration. The conversations didn’t always come easily, Lopez said.

“I remember one time, a plane flew overhead and he asked me, ‘Are you flying the plane?’ I said, ‘What do you mean? I’m standing right here.’ And he said, ‘I know you are, but are you flying the plane?’ The look in his eyes was intense and very real. I realized he has very different realities. It was my first window into it. I don’t know if any two cases of schizophrenia are exactly alike, but I realized that distinguishing what’s real and what’s not is a daily challenge for Nathaniel Ayers.”

After a few months, Lopez was driving to work and found Ayers playing on his violin in a freeway tunnel in sight of the Los Angeles Times sign. When Lopez asked him why he wasn’t playing under the statue, Ayers said he wanted to be near Lopez.

“This man left Beethoven to be near me,” Lopez said. “It was frightening, and I realized I may be in over my head. But I also thought what a powerful thing. What an amazing guy, what an amazing story. He hadn’t lost his dream. He hadn’t lost the passion. If he could ever find those other two strings.”

After his first column about Ayers, Lopez was inundated with calls from readers who wanted to help. Seven violins, a cello, even a stand-up bass and a piano were donated.

Since forging a friendship with Ayers, Lopez has sought help from mental health experts who have advised Lopez and helped “bring Ayers indoors” where he can live and sleep in safety.

Although Lopez believes that Ayers may be helped by psychotropic drugs, Ayers has refused, recalling early days of drug treatment that made his illness frightening. “It’s difficult, but this is something I have to respect,” Lopez said. 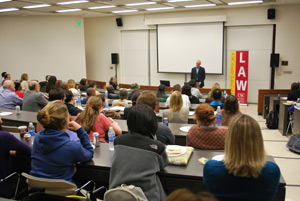 The classical music community, which was amazed by Ayers, has been supportive. Ayers and his former classmate, Yo-Yo Ma, played together at Walt Disney Concert Hall, and Ayers often is invited to play for dignitaries, including President Barak Obama at the White House. The pressure is sometime too intense, Lopez said, and Ayers is most comfortable playing among friends and in less formal settings.

In telling his story about Ayers, Lopez said his goal is “to put a face on mental illness. Perhaps, in the process, we can destigmatize mental illness. It’s one reason Skid Row exists. We have created this big corral of people we are afraid to deal with. It’s easy for us to judge them, until we know the individual stories.”

Elyn Saks, who founded the Saks Institute event and is recipient of a 2009 MacArthur Foundation “genius grant,” said Lopez’s talk was “powerful and moving. I also battle schizophrenia, and what’s most important is to put a human face on the disease.”